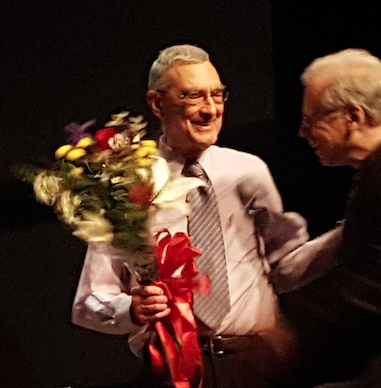 Chamber Music Amici co-founder and pianist Victor Steinhardt was a beloved colleague who performed music and approached life with empathy, originality, and a sense of humor.

“None of us could play chamber music with quite the level of sensitivity that Victor showed,” said Sharon Schuman, CMA co-founder and violinist. Steinhardt finely tuned his performance to the playing of other musicians, enhancing the collaboration. “Our ideas melted together, and everything worked. I played so well with him, and he made a series of people look good.”

That Schuman and Steinhardt would be two of five musicians to create CMA in 2008 seemed destined, given that she met Steinhardt only three days after her arrival in Eugene in 1981. “He was perhaps the most eminent, well-respected musician in Oregon,” Schuman said. By the time she met him, Steinhardt had already performed worldwide; collaborated with musicians like Pamela Frank and Leonard Rose; composed works for piano and chamber ensembles; and served on the faculty of the University of Oregon School of Music and Dance for more than a decade.

Born on March 10, 1943 in Los Angeles, California, Steinhardt and his brother, the distinguished violinist Arnold Steinhardt, were actively encouraged in their musical pursuits by their parents, Mischa and Pearl Steinhardt. Victor studied piano with Salome Ramras, Aube Tzerko, and Rosina Lhevinne. He launched his composition career at age 10 with “Hot Air on the G String,” a spoof of two pieces Arnold was practicing on the violin. At the age of 15, Victor made his concerto soloist debut with the Los Angeles Philharmonic. He earned an M.A. in Composition at UCLA, and studied composition with Mario Castelnuovo-Tedesco and Henri Lazarof. Steinhardt’s style reflects diverse aspects of his personality, both serious and playful, as heard in “Eighteen Pieces in the Form of a Limerick,” “Ein Heldenboogie,” “Tango,” “Running Blue,” and “Arietta.”

From 1968 to 2007, Victor was a professor of piano at the University of Oregon, where he met CMA co-founder, cellist, and current UO faculty member Steven Pologe.

“Victor was the most genuine and unpretentious human being,” Pologe said. “As a musician, he felt music deeply; we could feel his pleasure and gratitude when we performed together.”

Pologe went on to play with Steinhardt in dozens of settings, and later, with Pologe’s wife, violinist Kathryn Lucktenberg, would form Trio Pacifica, which performed throughout the western U.S., recorded CDs, and cemented an enduring friendship.

“We worked together frequently enough that we could play with Victor even when we couldn’t actually see him.” Pologe said. “Ideally one wants to be direct when rehearsing chamber music. The three of us were able to appreciate each other’s feedback and get past our egos. We enjoyed it, the audiences enjoyed it, and we continued until Victor was no longer comfortable performing.” 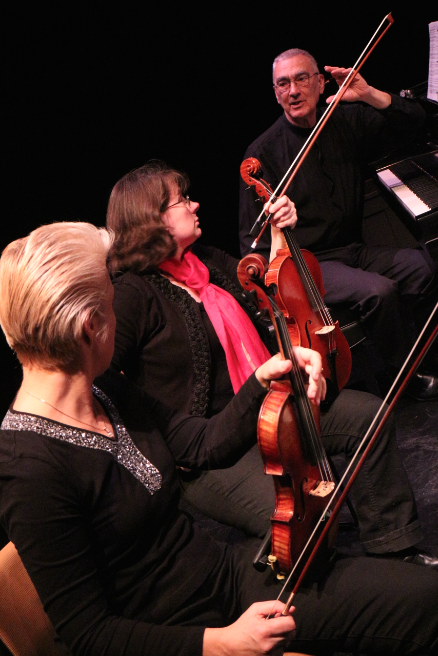 Steinhardt’s legacy as a musician and composer is equal to his impact as a teacher and mentor. Pilar Bradshaw, co-founder and retired CMA member, violinist, and doctor-owner at Eugene Pediatrics Associates, had the opportunity to know Steinhardt from a young age. Their relationship started when she was only five, when Steinhardt accompanied his daughter Stacy and Bradshaw in their very first public concert at the UO Beall Concert Hall. Steinhardt was there again 17 years later to accompany Bradshaw in her UO graduation recital. Decades later, she joined him and four other musicians in founding Chamber Music Amici.

“There is no other musician besides Victor who has played with me for my entire life,” Bradshaw said. “It was a beautiful lifelong friendship,” a friendship born of respect. “Victor was such a gentleman and knower of classical music,” she said. “He essentially mentored everyone at rehearsals because of his vast knowledge, but he did so with such kindness.”

With compassion and knowledge, Steinhardt raised her level of playing, Bradshaw said, with the intensity he brought to a performance and the sensitivity he had in interpreting a phrase, whether in words or through playing it.

“Live performance is unique, and playing with Victor helped you to do the best you could,” Bradshaw said. “He was equally comfortable playing modern or deeply historical music.”

For all those reasons, Steinhardt leaves a legacy as both a great performer and great teacher, said J. Robert Moore, professor of oboe and saxophone at the UO for 30 years, from 1975 to 2005.

“Victor was a gifted pianist, a much-loved professor, and an outstanding friend. He was a wonderful, centered, kind man,” Moore said.

The empathy and personal traits that made Steinhardt a friend to admire always transferred to the music that he played, said Moore and so many others who knew Steinhardt. The bond he formed with his co-performers elevated their work, and his incredible musical intuition made him an attentive and gifted member of any ensemble he played with.

“What we valued the very most in our performances together,” Moore said, “was our friendship and the love we had for each other.”